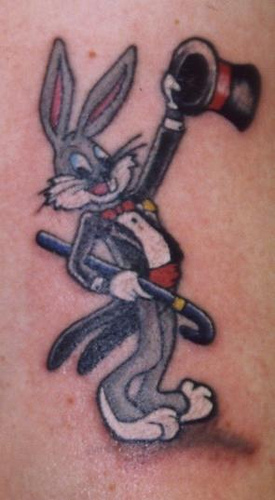 More and more often nowadays we see comic or cartoon-style tattoos on various parts of the body:  Mickey Mouse, Donald Duck, Bugs Bunny tattoos…you name it.  All the beloved Disney or Warner Brothers cartoons have become an integral part of our cultural heritage, so why shouldn’t we celebrate them in glorious Technicolor as tats, if we so wish?  Well, one reason we shouldn’t is that Mickey and co. are quite simply private property and depicting them in tattoos is a form of trespass.  Their original creators, or the studios that bought them, own all copyrights so reproducing them in any form is technically illegal.

If you can find a tattoo artist who specialises in this type of artwork, he will probably have acquired copyright permission to reproduce certain images, but it does not seem very likely that the vast majority of artists would have applied just on the off-chance that a client might want a Bugs Bunny tattoo on his arm.  However, it is always worth asking and establishing the position with the tattooist beforehand.

Bugs Bunny first appeared on screen in 1938 as the cheeky adversary of Porky Pig in the Warner Bros. cartoon ‘Porky’s Hare Hunt’.  One of the directors of this was Ben “Bugs” Hardaway, for whom the goofy rabbit was named.  However, his actual creator has long been disputed because the original rabbit was different in certain essentials. 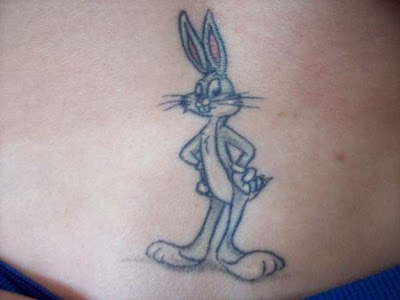 For one thing, the early Bugs was all white and much smaller than the later one, but his characteristics and mannerisms remained the same.  He continued to evolve until his appearance as the Bugs Bunny we now all recognised in ‘A Wild 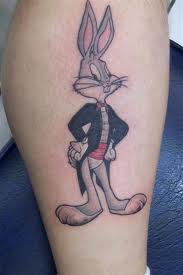 Hare’ in 1940.  This was directed by Tex Avery, who has always been given credit for his creation.  It was in Tex Avery’s cartoon that the carrot-munching Bugs first coined his famous catchphrase ‘Eh, what’s up, Doc?’ and developed his famous relationship with Elmer Fudd.   But one thing was missing – his name.

It was not until ‘Elmer’s Pet Rabbit’, directed by Chuck Jones in 1941, that he was first called “Bugs Bunny” on screen and, from then on, stardom followed.  He received his first Oscar nomination in 1942 for ‘Hiawatha’s Rabbit Hunt’ but it was not until 1958 that he actually won the coveted award for ‘Knighty-Knight Bugs’, directed by Friz Freleng.

The rabbit’s popularity has endured throughout the decades on cinema screen and prime-time TV, where he occasionally starred in commercials for a range of products.  He and his Loony Tunes gang were thrust back into the spotlight when they starred with Michael Jordan in ‘Space Jam’ in 1996.  Two years later guaranteeing his place forever in the annals of history, he appeared on a US postage stamp.

Unlike some of his associates – Mickey Mouse and Donald Duck in particular, Bugs never really made it into comics because this medium simply could not do justice to his zany character.  That does not mean to say that Bugs Bunny Tattoos would not get heads turning and people chanting the inimitable trademark phrase: ‘What’s up, Doc?’ wherever you go.