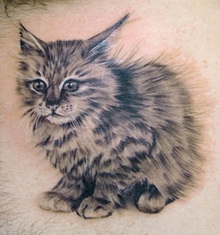 When it comes to cat tattoo designs, not everyone loves these creatures, but most of us are fascinated by them and some of us prefer them to any other animal.  Maybe, for some of us, our fascination is tinged with a little envy at the aloof dignity portrayed by our feline friends.  As Ernest Hemingway famously said: “A cat has absolute emotional honesty: human beings…may hide their feelings, but a cat does not”– and those of us who have been privileged to share our lives with a cat will certainly recognise this quality.    There is a proverb that says: ‘A cat is nature’s beauty’ so what better way to celebrate our fascination with these inscrutable creatures than by capturing their innate beauty in a carefully chosen tattoo?  Our tattoo artists can capture any aspect of a cat you prefer, from its graceful paw, the colour of its fur, or that special curve of the tail that lends this graceful creature its individual personality.  Below are some of our most popular cat tattoo designs to appeal to that feline f
ascination within you. 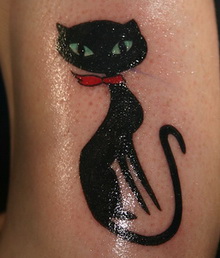 The Black Cat Tattoos:  Black cat superstitions are rooted in ancient folklore and there are as many people who believe that the sight of them brings good luck as there are people who consider them to be bad omens.  Traditionally they were believed to be the familiars of witches, who could change into human form, but mariners (and their wives) considered them to be extremely good omens.  With all these mysteries surrounding them, black cat tattoo designs makes great conversation pieces and will appeal to those for whom life’s mysteries hold so much attraction.

The Black Puma Tattoos:  Pumas, like panthers, cougars, leopards and lions, are majestic animals that symbolise strength and dominance over other animals.  They are inscrutable, yet watchful, observing every detail around them.  It is said that people who are identified with the puma carry a powerful protective energy around with them.  Puma cat tattoo designs symbolise that energy and inner strength and shows the world you are ready and able to face any obstacles without fear.

The Jaguar Tattoos:  The jaguar is the largest and most powerful feline in the western hemisphere.  It is a symbol of independence and cunning and has featured strongly in South and Latin American mythology as an important religious symbol for its superior strength and prowess.  It has been the popular emblem of nobility for many 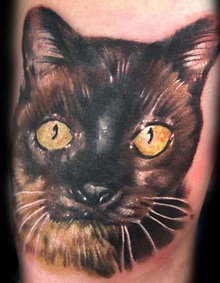 centuries and if you want a cat tattoo, a jaguar will symbolise that nobility and strength.

The Tiger Tattoos:  One of the most striking and powerful animals in existence, the tiger is a symbol of prowess in many Asian cultures.  They are solitary, territorial animals admired for their beauty, speed, sensuality and passion.  A tiger tattoo can depict any or all of these qualities and its physical beauty makes it a very artistic design.

The Lion Tattoos:  Known as the king of beasts, the reputation of the lion has spread across the entire world.  It is an intrinsic part of every religion, cultural belief and mythology.  It symbolises majesty and stands for divine power, strength, cunning and dignity.  Of all the cat tattoo designs available, the lion, king of beasts, has to be the king of cat tattoo designs.