Honey bee tattoos are very versatile and the bees themselves hold a surprising amount of symbolism and value in many ancient and current religions. The fun part of including honey bees in a tattoo is that you can just add just a few small bees for accent or you can completely center all of the artwork on them. Honey bee tattoos aren’t as common as tattoos of other animals, like tigers or butterflies, but they look to be catching on, and those who have included bees have ended up with some beautiful and unique pieces.

Humans have harnessed the power of honey bees for thousands of years and if it weren’t for those little warriors there would be no such thing as good fruit harvests or honey. While many people don’t care for bees because some can bite, sting, or even kill someone, there are still enthusiasts that recognize the strength and incredible abilities of the honey bee.

Egyptians were among some of the first to appreciate the honey bee. Honey was placed in tombs as a way to please the gods and ensure that the soul of the person who passed on was properly guided to the afterlife. In the days when Egypt was divided into two kingdoms they used the bee as an insignia for the king of Lower Egypt, and the tradition was adjusted and used even after Egypt was united into a single kingdom. In Egyptian mythology the belief is that bees are created by one of their most powerful gods, Ra, and that the bees grow out of his tears when they land in the desert. 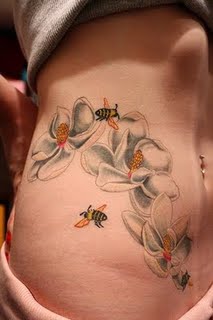 Greeks also hold a lot of respect for the honey bee, and the name Melissa directly means “bee” in their culture. There is also a tale of how the nymph named Melissa first discovered bees and the benefits of their honey, which she taught to her people in turn. Melissa later became one of the nurses to Zeus, and rather than feed him milk, like usual, she directed bees to feed Zeus honey by carrying it to him and depositing it right into his mouth. The term “nectar of the gods” was coined because of this legend.

Bees generally symbolize fertility and sexuality, and one of the biggest associations with the honey bee is productivity. They are strong little creatures that prove that anything can be accomplished if you work hard, making them a great example of integrity. The bee’s body should be much too large for their wings to support, but they persevere over their limitations by beating their wings faster to make up for the imbalance. Duty, honor and unity are also associated with the bee because all the members of the hive always follow their orders and they work as one to accomplish what’s best for the entire hive. Many authors and theorists have used bees as an example of the perfect human society, including Tolstoy, Aristotle, Virgil, and many more prominent historic figures. 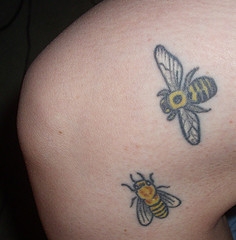 Honey bees can be added into any tattoo that involves nature like flowers, butterflies, birds, plant life, and landscapes. They can also be the central focus of a tattoo, big or small. Small honey bee tattoos work well on the ankle or arm as a nice accent and shouldn’t take very long to complete, but larger tattoos will afford you more versatility. There are many themes and scenes you can use with a bee tattoo, and the possibilities are as endless as your imagination.

A good way to figure out the design you want to go with if you decide that a honey bee tattoo is for you is to simply go outside and watch some bees in their normal habitat. If it happens to be winter then you can search for videos on Google or Youtube. Bees can be found just about anywhere, and there’s many different varieties and types to choose from. With so much positive symbolism and meaning behind honey bees you can’t go wrong with them in your tattoos. They also make a great conversation starter because bee tattoos aren’t very common and a rich, unique design will add to that factor.