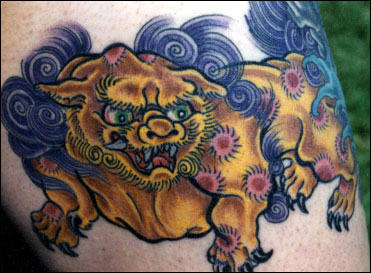 Fu or Foo dog tattoos are talismanic emblems designed to protect the wearer from evil influences or people with wicked intentions.  Sometimes known as the lion dog (because lions are sacred in Buddhism), or the celestial dog, these regal creatures guarded the ancient Buddhist temples of the Orient.  Their features are a combination of both feline and canine and they are usually depicted in an aggressive stance, with teeth bared and claws at the ready, always on guard to attack and rid their celestial manor of marauding demons.   Often the female of the pair has her mouth closed in order to keep good spirits in.   She is usually drawn playing with a cub which is reclining upside-down in a typical feline position of trust, and which also represents grounding and the earth or the ‘cycle of life’, while the male holds a globe, or ‘tama’, which is a Buddhist jewel, in its paws to symbolise heaven and the Buddhist law or ‘flower of life’.

This curious and almost comical-looking hybrid probably came about by the artists of ancient China allowing their imaginations to take flight.  Never having seen lions, they adapted the features of ordinary dogs to suit their ideas.  Nevertheless, their potent protective powers were widely believed and Foo dogs or Chinese guardian lions are common decorative features at the entrances of Chinese commercial establishments wherever Chinese people have immigrated throughout the world.  Their symbolic element is strong and they are frequently referred to as the dogs of happiness. 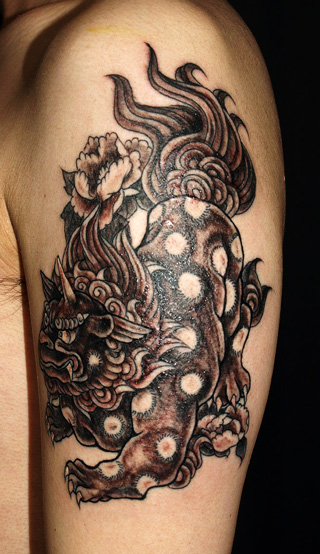 Because the Foo dogs were positioned at either side of the temples or celestial gates, they are often depicted in pairs, with the male on the right and the female on the left and, like the artists of old, the tattooist of today sometimes exercises a little artistic licence and some designs are reminiscent of Pekinese or Pug dogs, but the lion influence in the flowing mane is always evident.  They are often inked in bold, bright colours ( but personal preferences here are diverse), and are often set against a dramatic background. 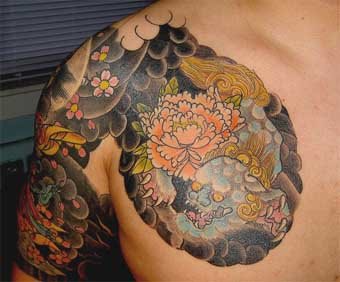 The Japanese Shinto religion also has a pair of lion watchdogs or ‘shishi’ which perform the same function in driving away evil spirits and bringing health and wealth into the home, though it is not clear whether these derive from the Chinese or vice-versa.  In the Japanese shishi, the open mouth has been said to represent inhalation of the life force, whilst the female’s closed mouth symbolised exhalation of life, or in other words, death.  This came about because the open mouth relates to ‘Ah’ and the closed to ‘Un’, which are the first and last sounds in the Japanese alphabet, symbolising the beginning and end of life.

Foo dog tattoos are metaphors for all the best characteristics symbolised by the lion: courage, strength, nobility, dignity, pride, leadership, wisdom etc, whilst faithfulness and protection can be attributed to the dog.  In tattoo art, Foo dogs are often combined with peonies, which are used symbolically in Chinese art to represent riches and honour.  Whether you come from the East or the West, Foo dog tattoos can surely be considered, in tattoo terms, to be man’s best friends.