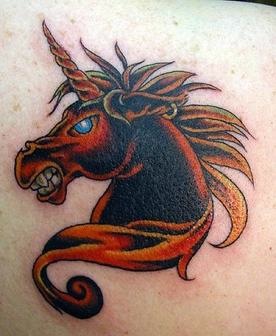 Anyone who has ever loved fantasy will have been enthralled with stories about unicorns and people wearing unicorn tattoos must always have a ready following of interested questioners.  What does a unicorn conjure up in your mind?  For me it’s childhood tales of fantasy or magical realism and I am always happy to recapture some of this magic every year at Christmas by unwrapping a tiny, crystal and silver unicorn, cherished since early childhood, and placing it on the Christmas tree.  But I suddenly wonder why I restrict myself to these fond associations for only a few weeks every year, when a unicorn tattoo would afford that pleasure every day!  Before I rush off to the tattoo parlour, I would like to share with you some ideas about unicorns.

Since ancient times, unicorns have been described as being hybrids of several different animals, but they are more famously depicted with graceful, horse-like features (usually white) and, of course, the single horn which is reputed to be the source of the unicorn’s magic. 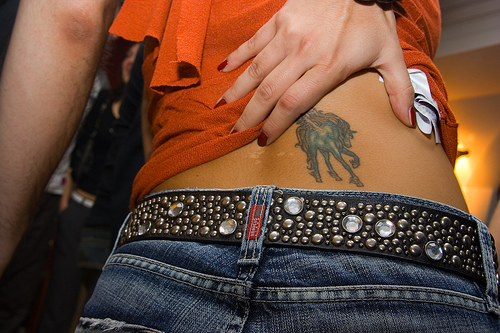 It is invariably described as being untameable but according to mythology it can be tamed by a virgin maiden and this has given it religious symbolism by adopting it as an allegory for the relationship between the Virgin Mary and Christ.  It mediaeval times it became an emblem of chaste love and faithful marriage.  In other legends they were said to live high above the clouds in order to keep away from humans, of whom they were very mistrustful and afraid.  They were reputed to have healing qualities and just to touch one would cure poisons and bring about healing.  Impure water could be cleansed if a unicorn dipped its horn into it.  In other legends it was said to be immortal, or that, like the phoenix, it would be reborn if destroyed.  Universally, there are no negative connotations to unicorns – and that is unusual! 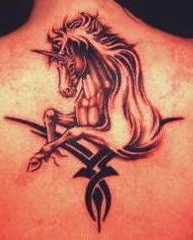 Unicorn tattoos symbolise goodness, purity, nobility and magic.  They also symbolise peace as the land of the unicorns enjoyed eternal springtime.  The wearer may be representing religious belief or seeking inner wisdom or knowledge of the mysterious.  In most cases the wearer will be female because unicorn tattoos are very much favoured by women.  These may want to symbolise their chastity or fidelity or simply be enthralled by all the romantic fantasy surrounding the unicorn.

Unicorns rarely feature alone in tattoos as they are often framed by clouds, stars or rainbows – usually all brightly-coloured to create a Disney-like aura of magic and fantasy or in a magical forest or spring meadow.  The unicorn is more often than not white, because of its associations with purity, innocence and virginity.  They are mostly preferred full length but some people choose a close-up of the head in order to capture the horn, eyes and facial expression in greater detail.

These tattoos may remind you of childhood pleasures and dreams, be an outward expression of personal beliefs or characteristics, or simply reflect your love of romantic fantasy where good always triumphs over bad.  Whatever people’s reasons for them, unicorn tattoos are always pleasing to look at and can never give offence.