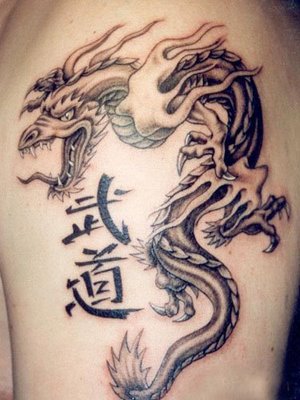 As the favourite creature of legends for centuries, dragons are, understandably, one of the most popular subjects for tattoos the world over and tribal dragon tattoos are becoming increasingly popular, particularly amongst young males.  There are two distinct styles of dragons, those belonging to the east which have long, snaking bodies and are wingless and those relating to western mythology with their elongated neck and mighty wings.  The meanings of the two are as different as their appearance: the Chinese and Japanese dragons symbolise benevolence, wisdom and good fortune whilst the western dragon is a terrifying, fire-breathing, destructive monster.

In mythology and folklore stories of dragons abound and these have resulted in a great variety of symbolism being attributed to them.  Many believe they have been around since the creation of the world and, in fact, had a hand in its manifestation, but they are equally associated with its destruction so have the dual symbolism of creator and destructor.  Because the western dragons were sentinels of the dead as well as fire-breathing monsters who guarded treasure, they symbolised guardianship. 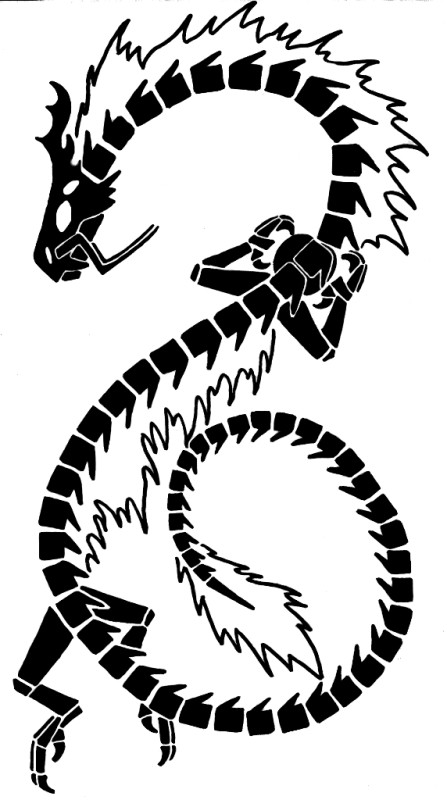 The oriental dragon was known as the kindly son of heaven, controller of the elements, whereas in the west he associated himself with the devil and these gave the dragon its spiritual and mystical associations.  Their great physical strength and fiery tempers also made them destroyers and bringers of death.  Their hierarchical position in the food chain, make them ungovernable and consequently symbolise physical prowess and freedom.  Dragon tribal tattoos, therefore, make unique, personal statements about the bearer of them as they can incorporate any or all of these symbolic meanings.

Most people who choose tribal dragon tattoos do so because they consider them to symbolise their inner feelings and unique personality.    Oriental dragons lend themselves particularly well to tribal art as the bold black strokes and absence of colour give the dragon a more prehistoric appearance.   It is usually associated with strength and power and, like most tribal tattoos, makes the wearer look strong and powerful, and accounts for its popularity in the art of tribal tattoos.  But it is still, also associated with all the good qualities of the eastern dragon and continues to symbolise these for many wearers.

The chief difference between the Chinese and Japanese dragon is the number of claws it has.  The Chinese believed that all dragons originated from China and then flew south and began to shed their claws.  The greater the distance they flew, the more claws they lost, hence Chinese dragons have five claws and Japanese have three! 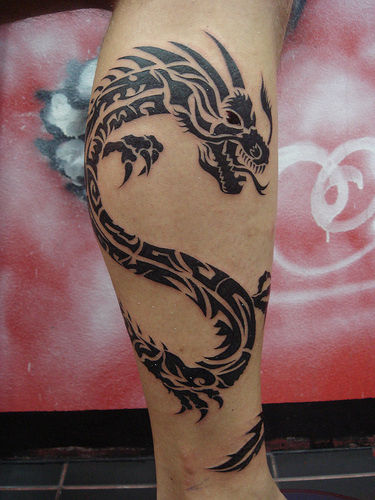 The areas of the body most favoured for tribal dragon tattoos are the arms and the back.  The arm works well because the dragon can traverse the whole length of it, whereas the back is a broader area for a larger design, or designs (some people have two dragons facing each other, which can look very effective).  Dragon tattoos are still used, in some areas of the world, to reflect status in society or the membership of a club or clan.  Whatever the reasoning, and whether you go for one or two tribal dragon tattoos, your artwork will guarantee admiration and respect from others. 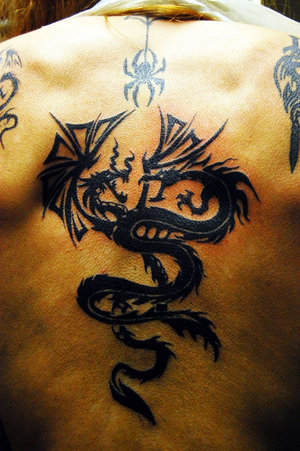