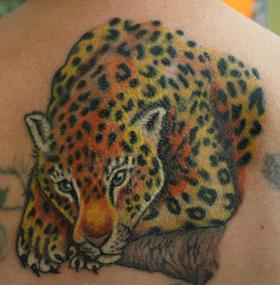 Along with tigers, lions and jaguars, leopards make up the four ‘big cats’ and these magnificent creatures capture the essence of the most prized animal qualities, like courage, strength and speed, making the leopard tattoo a popular symbol of masculine prowess. They are associated with shamanism across both eastern and western hemispheres and have always been much revered by these animistic practitioners.

This endows leopards with spiritual qualities and indeed their skins were greatly prized by the high priests of ancient Egypt to ward off evil spirits; and the young king, Tutankhamun, the high priest of the gods, was buried in a leopard skin cloak.  Because it was always reserved for royalty and because of its symbolic significance, the leopard skin became a powerful symbol of dominance, which has made the leopard tattoo highly desirable. 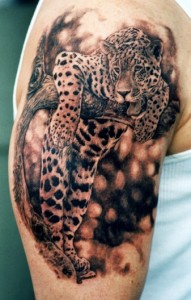 Because the leopard is quite a solitary animal, stealthy and cunning at camouflage, yet ferocious and powerful, it is an impressive predator and was used as a totem in Africa to defend homesteads and frighten away intruders.  This faith in the powers of the animal was manifest in shamanic rituals in which the leopard opened up channels of communication between the living and the dead for healing purposes.  The leopard tattoo, therefore, has positive influences and associations; and, because of its nocturnal habits and hunting prowess, it also has symbolic associations with the moon, linking it to traditionally feminine, visionary qualities. 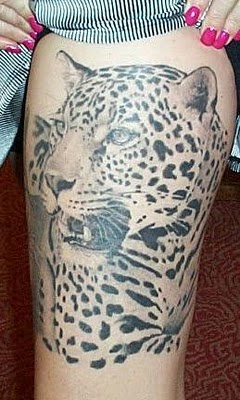 Some tattoo-lovers prefer their leopards in a jungle setting, often depicted with other wild animals, which enables the artist to make the most of his skills and colouring techniques.  The spots, or rosette, of the leopard (so called because of the way they form in clusters) can be differentiated from the jaguar, to which it is closely related (although jaguars are larger in build and closer to the tiger in nature) because the formation of the jaguar’s markings are more regular.  Whilst the jaguar is an impressive predator, many think it lacks the mysterious beauty of the leopard.

The leopard tattoo is always an impressive work of art, enabling the artist to demonstrate his real skills.  Whether the image is depicted in colour or monochrome, the leopard can be clearly identified by its spots.  Whether in a jungle scene or savannah, reclining in regal luxury or doing what it does best: hunting and stalking its prey, the depth and detail of these images can bring new dimensions to tattoo art.  They can ripple with life and capture the primal energy of these amazing beasts, which gives them such an enduring appeal in tattoo art.

So beloved was the leopard by one English eccentric, that he had his entire body covered in leopard spots.  Tom Leppard, an ex-soldier from Suffolk in England, became known as the Leopard Man of Skye when he chose to move to that remote Scottish island to avoid the public limelight generated by his radical tattoo work.   No-one would dream of suggesting that you take your admiration of these truly splendid animals to such an extreme, but if you choose a leopard tattoo, you can be sure it will be the focus of a great deal attention and admiration for the rest of your life. 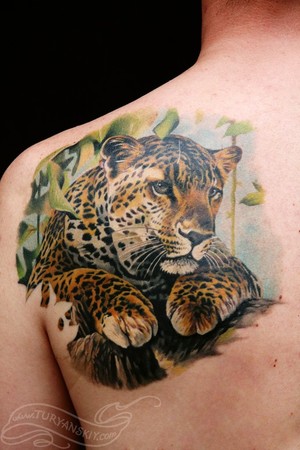