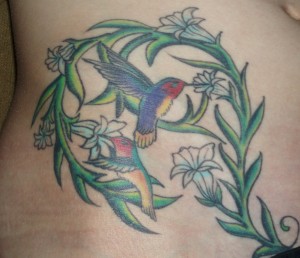 Hummingbird tattoo designs are a relatively modern trend in tattoo designs.  Because these birds are among the smallest birds in existence, they make interesting subjects for tattoos and are greatly sought-after, particularly by women.  But what accounts for their sudden popularity as tattoo designs?  Perhaps it’s because of their pretty, neat little features as a stand-alone design, or perhaps because they make an excellent additional detail to a larger, more intricate design.  At any rate, because of the increasing popularity of hummingbird tattoo designs, we need to delve a little deeper into the stories and legends about this colourful, tiny creature.

In the natural world, hummingbirds are not the type of bird you see in your garden every day.  They are only found in the western hemisphere, feeding off nectar, like bees.   The Central American Aztecs believed they had supernatural powers because when an exceptionally brave warrior, conceived from a ball of feathers, died in battle, his mortal body vanished and a hummingbird whirred up from the ground and led his people to victory. 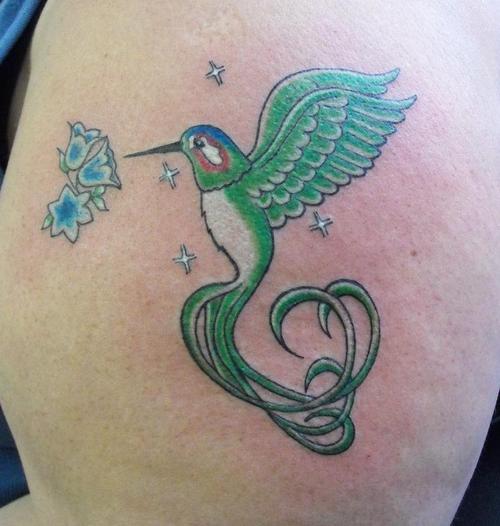 After that, the Aztecs believed that each warrior slain in battle, rose up to the sky before being reincarnated as a hummingbird and fed off the flowers in paradise.  At night they became soldiers again, defending daylight from the powers of darkness.  It is a beautiful myth and hardly surprising that Americans love to entice them into their gardens.  The Native American Ohlone people told a charming story of how the hummingbird acquired its red throat and saved the world by bringing fire to it.  The hummingbird is the national symbol of the Caribbean island of Jamaica and is considered sacred. 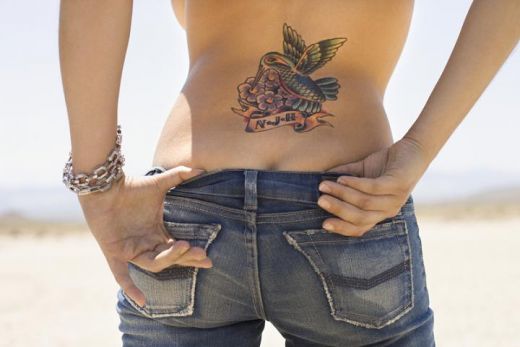 Another delightful image is a colourful hummingbird in flight and contemplating landing on some imaginary nearby flower.   Hummingbirds are quite territorial creates and a bird with its busy little wings spread wide is generally thought to be a symbol of aggression.  Tribal hummingbird designs which use thick black ink are also quite popular as is the rather romantic idea, for couples, of having hummingbirds facing each other, like mirror-images.  For that added touch of romantic commitment, surrounding the bird with the name of the loved one sends a very clear message of love. 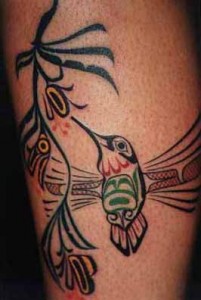 Because hummingbirds are small in nature, it is better to keep the tattoo small as well.  The areas of the body that lend themselves best to small tattoos are the ankles, wrists and upper arms.  But why leave your tiny bird all alone?  Be creative with your design by adding flowers, leaves or vines or using your own artistic skills to create your own truly unique hummingbird tattoo designs.