Apart from on people born under the zodiac sign of Scorpio, scorpion tribal tattoos might seem an unusual choice of design.  What we all know about these creatures is that they are foreboding predators with a nasty sting in their tails, and those born under their zodiac sign are usually people one should be careful not to cross!  But the symbolic significance of the scorpion goes much deeper than that and there are some cultures who embrace scorpion tattoos and wear them with great pride.

Tribes in Africa use scorpion venom for medicinal purposes, so the scorpion is seen as a healing sign.  In Egypt and Tibet, the creature is sometimes made into an amulet to ward away evil.  The Samarians associated scorpions with the sun and depicted them as guardians of sacred gateways, whilst in Greek mythology they symbolised death.  Wherever there are stories and beliefs about scorpions, so scorpion tribal tattoos will be found.  But why do people choose them?

Perhaps they are chosen because the wearer wants to convey the message that he is strong and hard – not someone to tangle with.  As tattoos they are usually worn where they are most visible and it seems that size matters little – the reaction they receive is generally the same.  They make great conversation pieces once the admirer has got over his or her initial reserve and plucked up the courage to talk to the wearer. 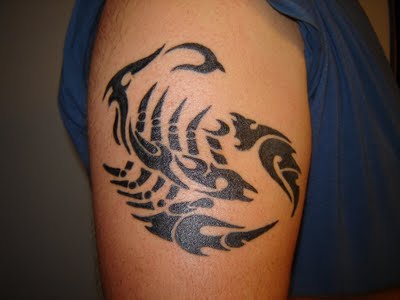 There may be deeper meanings behind the choice, such as interest in the healing qualities endowed on scorpions, or the more mystical associations with death, the afterlife or spiritual enlightenment.  It could be that the wearer identifies with the opposing qualities of the scorpion and is representing the fact that conflicting forces are inherent in humans, just as they are in nature; good and evil, in differing degrees, can be found in all things.  Or it may just be representative of the wearer’s birth sign.  Whatever the reason, there will be something to say and some knowledge to impart.  If you are thinking of one for yourself, bear all this in mind when you choose your design. 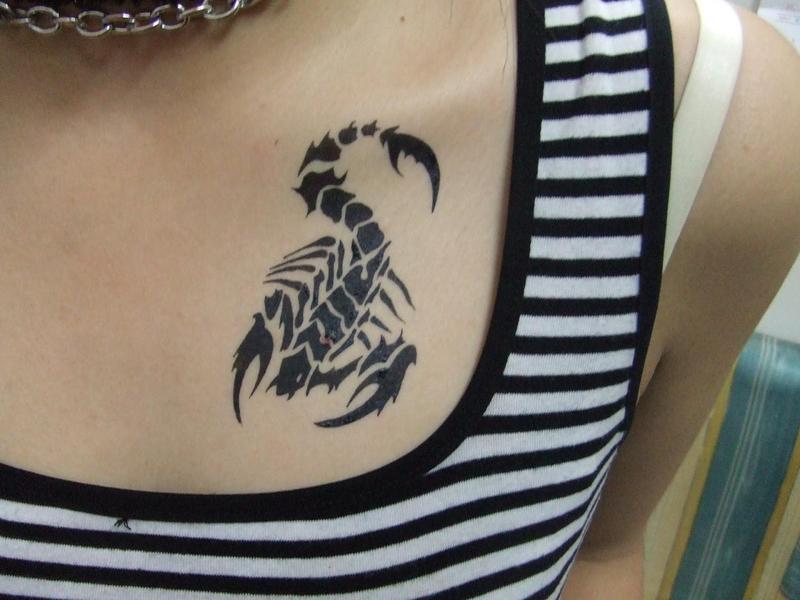 Scorpion tattoos lend themselves particularly well to the more abstract tribal art style with its bold, dramatic lines.  Black is a popular colour of choice for scorpion tribal tattoos and these can be very aggressive or seemingly passive and unresponsive: ready to attack with its lethal sting, or aloof and unconcerned.  Consider the completely different messages these contrasting designs convey.  One immediately says ‘Beware’, whilst the other says ‘Look at me, I’m actually quite beautiful’!  Perhaps this latter scorpion is your protector.  Careful use of colour could also add a touch of exoticism and uniqueness to your tattoo.

Whatever your reasons for choosing this unusual tattoo and whatever style or size you choose for it, you can always be sure that your scorpion tribal tattoo will intrigue even the most incurious soul and will be something for you to talk about for the rest of your life.