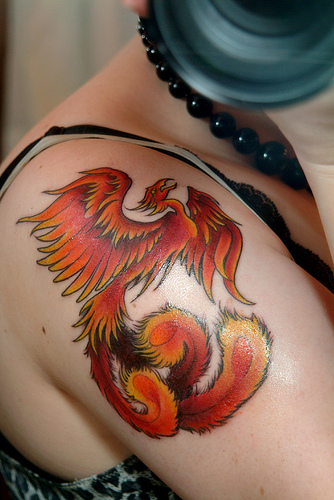 In the artistic world of tattoo-art, there can be no more beautiful designs than phoenix bird tattoos.  These mythical, gloriously-coloured birds, which were unable to reproduce biologically, were said to build their own funeral pyres, in the shape of nests, at the end of their long lives.   They would then set fire to themselves until they were reduced to mere ashes.

From these ashes would then arise a newly- reborn young phoenix, ready to begin its long life cycle once again.  Their cry has been described as a beautiful song, so enchanting that even the gods paused to listen; and in some stories, the birds are said to be able to transform themselves into humans.  Phoenix bird tattoos are particularly beautiful because of the bird’s highly-coloured plumage and scarlet and gold tail feathers resembling flames.

Phoenix bird tattoos are generally chosen to symbolise the inner fire, which is the life-force within us all; indeed the Russians called the phoenix the firebird.  It is also sometimes referred to as the bird of paradise, as some cultures believed it was the only living creature to remain in paradise when all other creatures were expelled. 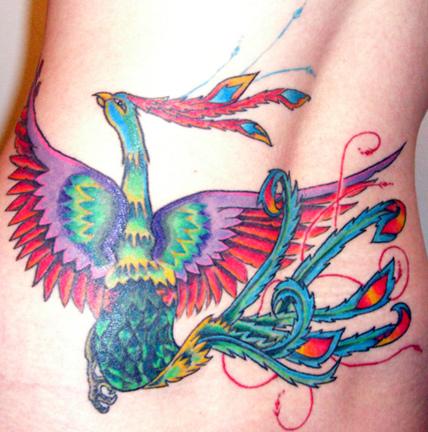 The phoenix or firebird has therefore come to symbolise enchantment as well as renewal, or new beginnings and is the subject of some of the most brightly colourful tattoos around.  They can also symbolise longevity or immortality.  The ancient Egyptians, who longed for immortality, deified the bird, believing it represented the soul of Ra, the powerful sun god who was the guardian of the pharaohs and commander of the skies.   In Chinese mythology the phoenix is the symbol of grace and virtue, bringing yin and yang together in perfect harmony.  It is a very positive symbol, often used in weddings or for royal decoration, sharing the same status in Chinese culture as the dragon. 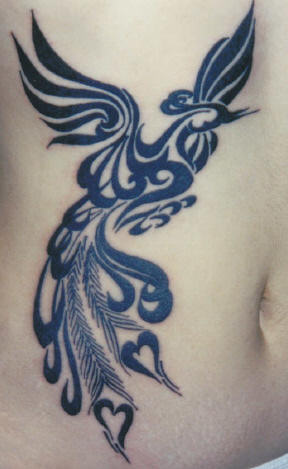 The phoenix bird tattoo design has enjoyed enduring popularity and in more modern literature and culture it is no stranger to a vast array of popular fiction from the pens of D. H. Lawrence up to J. K. Rowling, creator of Harry Potter, and also in the highly successful Final Fantasy, Digimon and Pokémon games.  It is hardly surprising therefore that its popularity in tattoo art has enjoyed the longevity associated with the fabled bird. 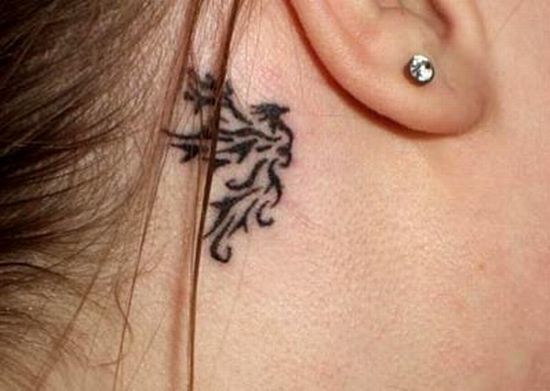 The phoenix design is equally sought-after by both genders, perhaps because it brings the highest masculine and feminine qualities together in perfect union.  Men prefer to have their arms tattooed with this design whilst women seem to favour their lower back area or belly for their tattoo.   Ideally it should be large enough to display the striking array of colours in all their glory.  Because there are so many design and so many colours available nowadays, it is well worth visiting a tattoo shop or spending some time browsing designs on-line to ensure you find the perfect representation for you.  Because of the richness of the myths and legends surrounding this wonderful creature, you will want to ensure that, when you make your choice from all the phoenix bird tattoos available, you will select the one that is absolutely right for you.