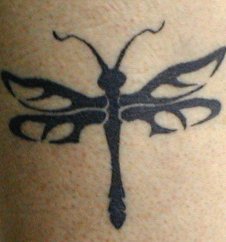 We all know that tribal tattoos are enjoying a resurgence in popularity and that demand for them is increasing almost daily, with the tribal dragonfly tattoo gaining in popularity faster than most other designs, but it is always worth reminding newcomers to the wonderful world of tattoo art, that tribal tattoos are permanent fixtures and therefore need careful consideration before committing to any design.

Tribal art tends to be more dramatically defined with bold, sweeping outlines and the dragonfly lends itself particularly well to this style of art.  Because dragonflies have a universal appeal, the bold, tribal look of this delicate, fairy-like creature, can look quite masculine, while at the same time, its ethereal, insubstantial body and gossamer wings cannot fail to appeal to women.  Personally, I hate these creatures in real life, but in tattoo art, I find them quite mesmerising! 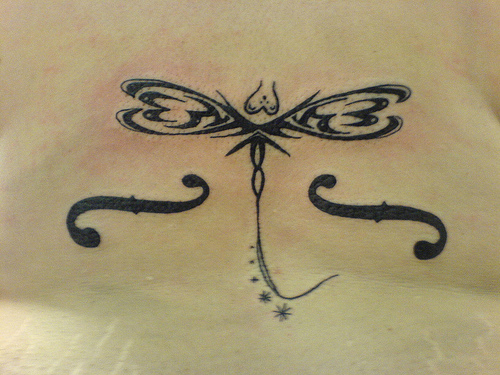 So what is it about these delicate dragonfly creatures that holds so much fascination (and revulsion) for us?  Perhaps a look into the myths and symbols surrounding them might awaken some hidden consciousness within us.  The very name it bears is sinister and worrying, but dragonfly is not the only name it has.  It is also known as ‘Devil’s Darner’ (because of its needle-thin body and darting movements); ‘Water Witch’ (because they start their lives in water) and ‘Snake Doctor’.

Now I come to think of it, I prefer dragonfly myself!  In European and early-American myths, little children were told that if they were naughty, a dragonfly would sew up their eyes and ears while they slept.  Other myths claimed they were servants of snakes and could pick out human eyes.  Yet other cultures believed they were servants of the devil, used to weigh people’s souls.  When one buzzed around your head, it presaged serious injury.  Not beautiful connotations any of them, and unsurprising that so many people feel an almost primal revulsion towards the creatures. 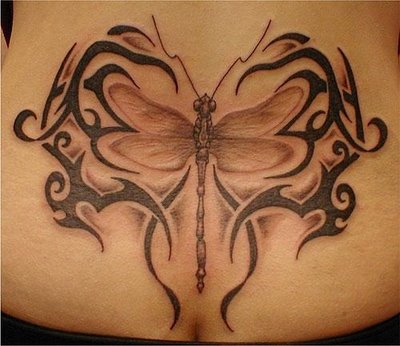 But there are some more positive associations with dragonflies.  In some cultures they are associated with air and water and are, therefore, symbols of purity.  They can signify happiness, strength, courage and rebirth.  Some mythologies claim they transcended from dragons into these incorporeal, agile and seemingly invincible creatures of the night.  Because of these stories of transformation, they are frequently associated with rites of passage, when youngsters begin the process of turning into adults.  In Chinese and Japanese legend, dragonflies are perceived as heroic and even holy, and in some parts of the world they are even eaten as a delicacy! 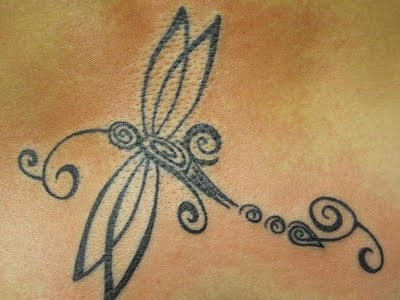 It is little wonder, then, that dragonflies tattoo designs feature so much in fantasy and have become objects of fascination for tattoo-lovers: ugly and beautiful, fairy-like and monstrous, these creatures are oxymorons personified.  If you have decided on one as the subject of your tattoo, you probably have a powerful imagination as well as a taste for the whimsical, so apart from doing your research beforehand, try producing your own sketches of how you want your dragonfly to look and then your tribal dragonfly tattoo will truly be a unique piece of body art.