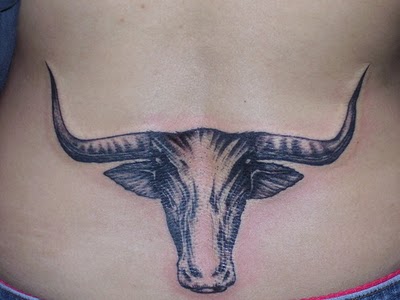 Traditionally and historically longhorn bull tattoos have been one of the most popular tattoo designs because they represent what is considered to be the essence of masculinity.  In the early days of western tattoo art, long bull tattoos or cowboys were symbolises the strength, power and determination of this tenacious animal which represented all the qualities they sought for in themselves.  In those days, tattoo art was very crude, but it nevertheless answered the needs certain men felt to adopt or personify specific qualities they admired in nature by representing images of what they admired on their bodies and thereby, metaphorically, attributing these qualities to themselves.  It is unsurprising that longhorn bull tattoos have gained in popularity since then, because clever marketing strategies have promoted the symbol to great media prominence in the endorsement of male-targeted products, such as cologne, clothing and energy drinks.

Because long horn bulls exist all over the globe, the world is full of stories about them and symbolism surrounding them.  To the Celts, bulls symbolised great physical strength because of their powerful build.  They were also associated with virility and procreation.  The Druids connected them with solar energy and used them sacrificially to acquire wisdom and spiritual powers.  Later on they became symbols of abundance and wealth.  In Greek mythology the god Zeus transformed himself into a bull to win the love of Europa.  Their son, Minos, became king of Crete and introduced the infamous Minotaur, a raging bull-headed creature, to the labyrinth at Knossos.  These stories endowed the bull with many symbolic qualities, including passion, transformation, determination and fulfilment. 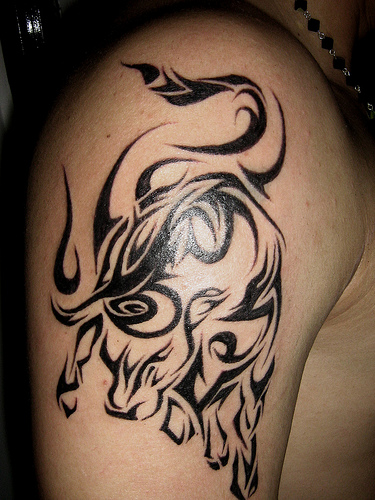 The constellation of Taurus the bull is linked to spring and rebirth, conjuring symbolism of rejuvenation and renewal as well as fruitfulness and abundance.  In western astrology, those born under the sign of the bull are powerful both physically and spiritually.  They invariably get their own way because once their mind is made up, they are immovable!  In the Chinese zodiac, the bull symbolises perseverance and people born in the year of the ox or bull are hard-working folk, determined to succeed.  In other ancient cultures, the bull signifies guardianship, protection and harmony.

The Texas longhorn bulls, originating from Spain, became the founders of the American cattle industry and the symbol of the state of Texas.  The legendary cowboys of the Wild West made their reputations in the herding and controlling of these powerful creatures.  Today’s cattle barons still proudly sport the emblem of the longhorn bull on their vehicles and may very well prize their longhorn bull tattoos in the same way the early cowboys did.

Being such large and powerful animals, these tattoos display best across the shoulder blades or upper back where they can be seen to their very best effect.  Whether or not you are affiliated with the state of Texas, born under the sign of Taurus, or in the year of the bull, longhorn bull tattoos could well be the right choice of design for you, making a statement about your unique personality or personal or physical qualities.