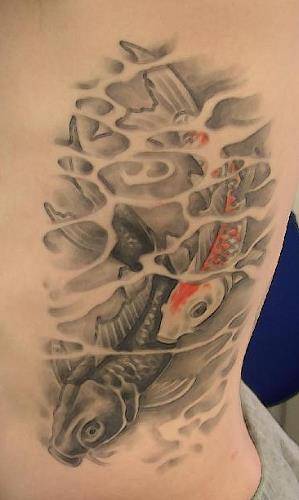 Fish tattoo symbolism is probably the most ancient known symbolism to man and is as diverse as the different species and cultural contexts that exist.   Shrines to ancient fish deities have been found tracing back to 6000 BC in Europe, and Indian pottery containing fish designs has been found dating back to 2500 BC.  These were probably vessels used in worship of the fish gods.  The Hindu goddess Kali, goddess of time and change, was referred to as the fish-eyed one, and fish have continued to represent religious beliefs up to the present day.

In many cultures, the fish was the symbol of water, the life force, and this has therefore given rise to its association with fertility, reproduction, and reincarnation.  In India, it was a marriage symbol and when a bride entered her husband’s house for the first time, she carried a fish in her hand.  The fish was eaten to reincarnate the soul in a newborn child.  The associations with fertility, sexuality and birth continued in paganism throughout Europe and the fish was subsequently taken up as a Christian symbol.

Two fish swimming in opposite directions is also the symbol of the twelfth zodiac sign Pisces and this is often given as the reason for choosing fish tattoos.  But there are as many other reasons as there are types of fish to choose from.  Japanese koi fish are becoming popular pets for ornamental ponds and, as the most revered fish in Japan, they also make popular tattoo designs.  Not only are these beautiful and highly colourful creatures, they symbolise courage and determination (because, like salmon they swim upstream against the tide), they suggest a strong, independent personality and also bring good luck, fortune and blessing. 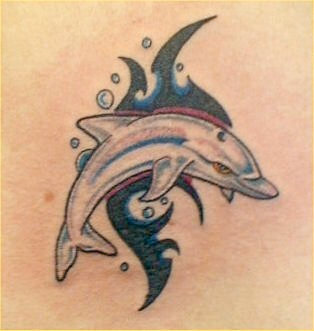 Dolphins are surrounded in symbolism and are becoming very popular tattoo choices.  All over the world they are regarded as man’s friend and are associated with wisdom, gentleness and harmony.  They also have spiritual connotations as many cultures consider them to be sacred creatures. 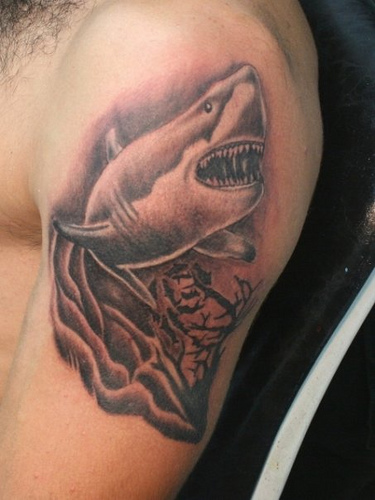 Sharks strike fear into the hearts of many people because of their reputation as ferocious predators, but they make impressive designs and often symbolise bravery and fearlessness.  Sailors frequently wore shark tattoos as emblems of protection at sea.  Piranha fish also make striking designs and are popular choices for those who want to display their masculine fighting spirit to the world. 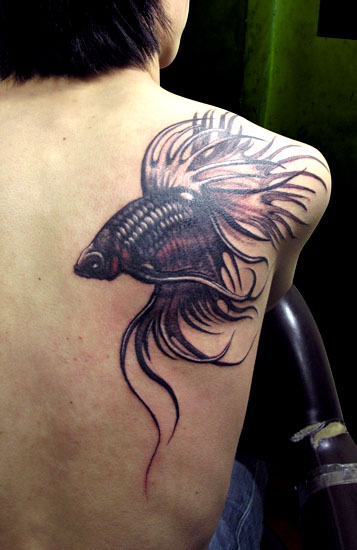 Beta fish (or Siamese fighting fish) are also become popular choices because of their incredible, almost sensuous beauty, coupled with their reputation for aggression.  Because they are so fierce, they are often kept alone and therefore could symbolise the wearer as something of a loner too.

Fish mainly tend to be the tattoos of choice for men rather than women, although the Christian symbol for suffering and redemption may be favoured by women as well, as an outward sign of their faith and commitment to Christ.

As with all tattoos, you should research your choices carefully before deciding on your design.  This is especially important with fish designs because fish tattoo symbolism is too vast a subject to do justice to in a single article.