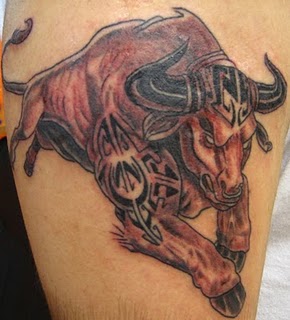 There are so many reasons for the popularity of raging bull tattoos that I hardly know where to begin writing about them.  Because bulls are found all over the world, they are instantly recognisable – and feared – and everyone knows some story or legend about them.   They symbolise strength, masculinity, power and virility, to name just a few of their meanings.

Bulls have long been admired for their strength and powerful build and the Celts also associated them with virility and procreation, whilst the Druids linked them to the energy of the sun and also used them in sacrifice in their quest for spiritual enlightenment and wisdom.  Their solar association also make them a symbol of the heavens and resurrection, whilst their relationship to cows (females), and their crescent-shaped horns, resembling moons, imbues them with feminine lunar powers links with earth, water, night and also death – in other words, the best of all worlds!

Bulls feature frequently in Greek mythology, not least because the mighty god Zeuss transformed himself into one in order to win the love of Europa.  In the Chinese zodiac, the bull (or ox) symbolises perseverance and fruitful labour – the main qualities endowed on people born in the year of its reign.  In other cultures it signifies paternal qualities of guardianship and protection.  The constellation of Taurus the bull is connected to spring and rebirth in nature and, in western astrology, those born under its sign enjoy both spirituality and physical prowess. 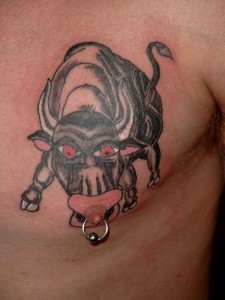 Raging bull tattoos may have enjoyed a revival since the 1980s cult movie starring Robert De Niro, acclaimed for its disturbing violence and poignantly convincing portrayal of a man’s inner struggle.  ‘So gimme a stage/Where this bull here can rage’ the hero says, which shows his inability to tell the difference between fantasy and reality.  Raging bull tattoos can therefore reflect the frailty of the human psyche – after all, how often do we try to act tough when we are feeling frightened and confused inside? 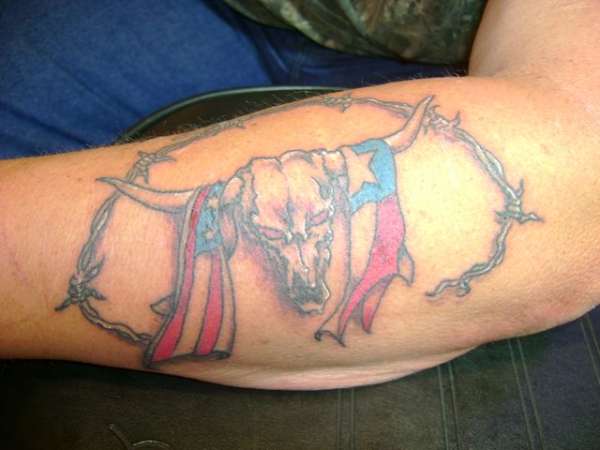 The raging bull is perhaps most commonly associated with Spanish bullfights in which humans pit their agility and wits over brute force – a typical symbol of good triumphing over evil, but even the matadors show respect to their animal opponents and some of their moves, or passes, have religious connotations.  The raging bull, rampaging around the ring invites connotations of the ancient gods of war and thunder, of wrath and retribution, and reminders of man’s mortality and frailty.  If they can be tamed (as in mythology they frequently were), what great assets to the human race these mighty creatures are.  Perhaps that is one message that men sporting raging bull tattoos wish to convey!

After all, the bull is strongly linked to love in mythology, most famously when Zeus transformed himself into a beautiful white bull to win the love of Europa and also  in the story of the birth of the Minotaur and its role in bringing the union of Theseus and Ariadne.  Raging bull tattoos therefore have a wealth of symbolism and meanings and anyone sporting such a tattoo can never be short of a spell-bound audience to entertain.