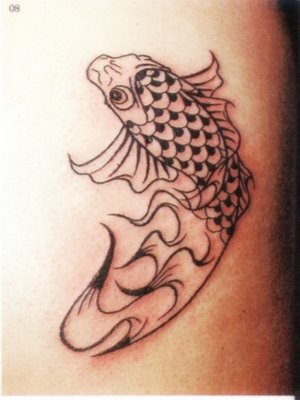 Koi fish, more commonly known to the western world as carp, might (to a westerner) seem an unlikely subject for a tattoo, but the rich symbolism behind these fish must explain why koi fish tattoos are such popular choices, particularly with men.

The beautiful Chinese and Japanese koi bear little resemblance to their lowly European ancestors, but both species were known for their tenacity and ability to survive and adapt to different climatic and water conditions.  They swim upstream against the tide, which requires stamina and determination to triumph against adverse conditions, which might explain why they have been imbued with symbols of vigour, strength of character and independence of spirit, and could also explain why koi fish tattoos are so popular with men who feel they can affiliate themselves with such qualities.

To develop a little more understanding of the ideas and symbolism surrounding koi fish, we need to delve a little further into their background and the origins of these beliefs.  These fish were introduced into the eastern hemisphere somewhere between 400 and 600 years ago.  Prior to that they were rather dull and unexciting creatures though still appreciated for their tenacity, energy and adaptability.  With careful breeding, more exotic colour patterns were created and simple carp became the koi, or king of fish. 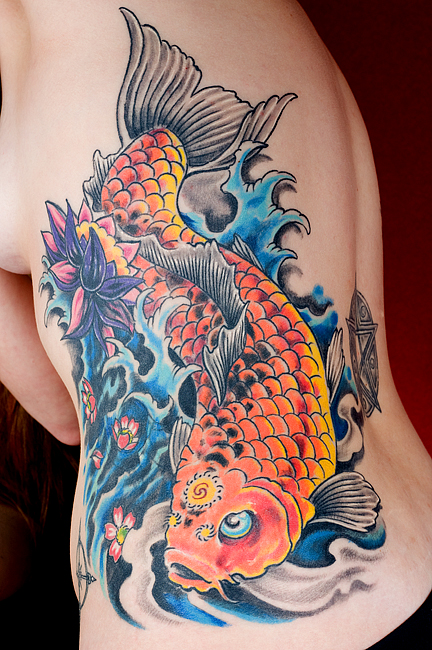 In Japanese culture, the koi fish tattoo design is associated with masculinity and flags depicting koi fish are flown to celebrate the birth of male children and are meant to endow them with desirable masculine qualities such as strength, determination and courage.  In Chinese culture, it was believed that if any of these tenacious creatures could navigate far enough up the Yellow River to reach the point known as the Dragon Gate, the fish would be transformed into a dragon.  This has therefore imbued the koi with the attributes of great ambition and the pursuit of dreams.  And then, of course, in western culture, there is the astrological sign of the zodiac, Pisces, often depicted as one or two colourful fish and symbolising compassion, imagination and intuitiveness. 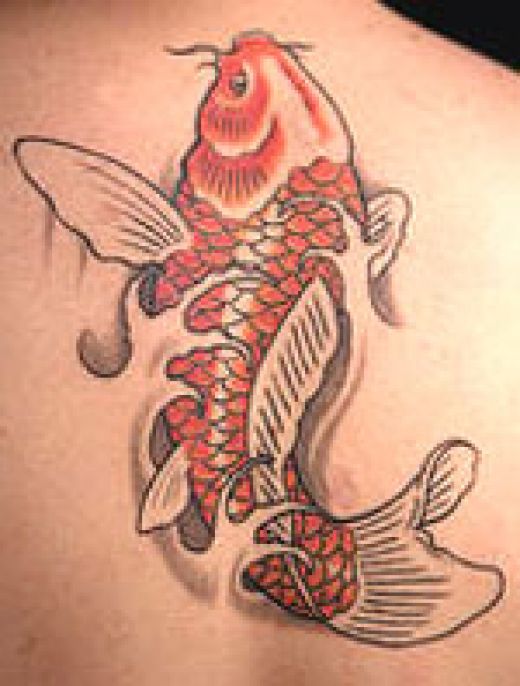 Pisceans are gentle, patient people who enjoy great popularity because they accept people around them without criticism,  but they are also introspective thinkers, in tune with the mysteries of nature and the more mystical side of their character.  Hopefully this should go some way to explaining why the koi fish has earned its place in the tattoo artists’ hall of fame, but what does it tell you about the appearance of this lovely creature in koi fish tattoos? 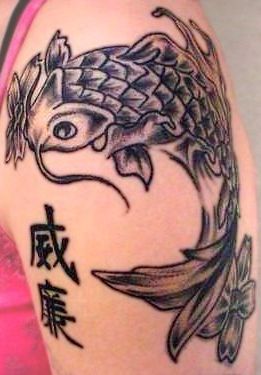 To capture the sheer, abundant energy of this remarkable fish, koi fish tattoos usually depict curving bodies and flamboyantly swirling tails, all in clean, vibrant colours, to suggest vitality and movement.  Traditionally they are etched in black and white, but as more exotic-coloured species are introduced into the world, so more lively colours are being used to capture the essential beauty of these majestic fish.  The tattoos must also depict the intrinsic qualities of the species and these must reflect the beliefs and emotions of the wearer in order for him or her to truly appreciate the symbolism and artistry behind koi fish tattoos.