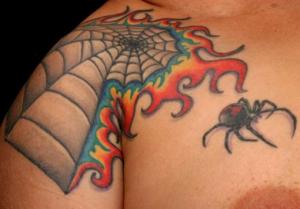 Despite the beautiful, intricate delicacy of these gossamer constructions, and the positive super hero imagery of Spiderman and Spiderwoman, spider web tattoos have fallen into disrepute as tattoo designs because of their negative connotations.  Originally they were symbols of industry, patience and flexibility associated, in Greek mythology, with Arachne, famed for her talents as a spinner and weaver, but who overstepped the mark when she committed hubris and challenged the goddess Minerva to a contest.

As goddess did, Minerva wrought revenge and turned Arachne into a spider.  For some time now, however, spider web tattoos have become one of those coded signifiers that denote a number of negative qualities. 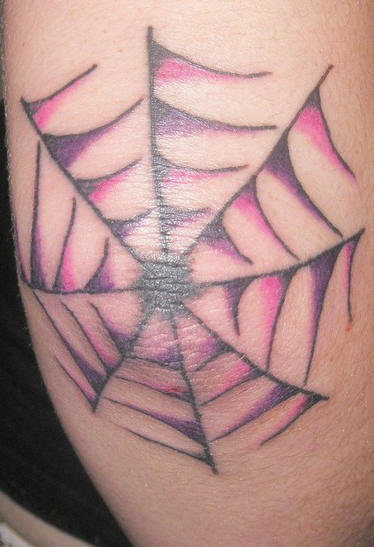 Modern symbolism surrounding spider web tattoos suggest that they are primarily considered to be jailhouse tattoos.  In other words acquired in jail and for every year as an inmate an extra outer rung is added to the design.  These are most commonly worn on the elbow.  Unfortunately, they have also been adopted by skinheads, white supremacists and other people with anti-social views on race, homosexuality etc.  One sinister report, about 15 years ago, tells of a man who murdered a black couple in order to prove his eligibility for a spider web tattoo.  They are even reputed to be a kind of tribal symbol for drug users, in order for them to recognise each other.

These connotations are far from positive but have entered the annals of urban legend and will be difficult to entirely erase from people’s minds in the foreseeable future.  But in the flourishing world of tattoo art, where individuality is valued and cultural barriers are minor hurdles to be overcome, the spider web tattoo can take on the positive symbolism of its creator as a creature of limitless patience and resourcefulness.

The legend from my early schooldays that impressed me most was that of ‘Robert the Bruce’, crowned King of Scotland in 1306.  After his defeat in battle, Bruce hid in some caves for three months until almost at the point of despair and ready to surrender.  As he waited, he watched a spider building its web which was destroyed over and over again.  Each time the spider patiently returned to its task and rebuilt its web until finally it was completed.   This gave Bruce renewed strength and he decided to return to battle, telling his men “If at first you don’t succeed, try, try, and try again.”  Bruce went on to win the famous Battle of Bannockburn, against incredible odds!  And the spider entered common folklore for its industry and patience. 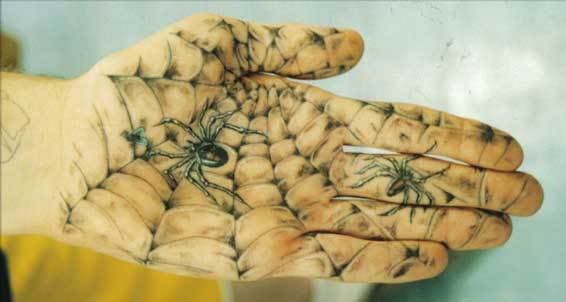 There are other legends and myths about spiders and their webs and what they signify and, if you have decided to go against the common flow and have a spider web tattoo, you could spend a pleasant afternoon researching some of these.  They might help you to decide where and how best to display your icon.  If nothing else, they will provide you with ample conversation pointers about your newly acquired tattoo when people ask.  And this will surely help to dispel some of the negativity of the modern legends surrounding spider web tattoos. 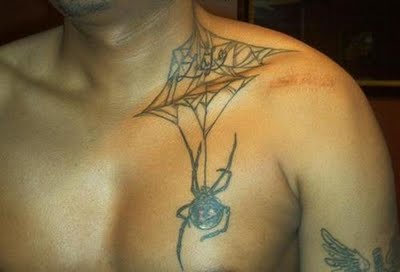